What a year it was in banking. The industry seemed to be accelerating its pace of evolution more than we have ever seen before. I had a very hard time to find that one key thing, the most important news of this year for the industry.

You know, the news where we think back to later, in time, and think “that is what made 2019 so important”? 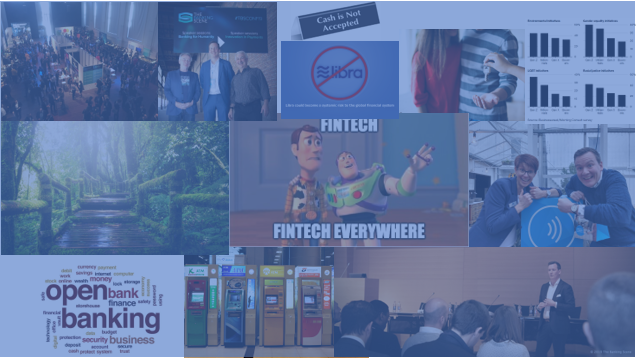 I added a few that may be that one, but I am sure you have more to share with me, don’t you?

Is “Instant Payments” what made 2019 so important?

Was it Instant Payments? The Belgian banking community pushed the ‘live’ button of Instant Payments early this year. The main reasons for these immense investments were ‘because the market asks for it’ and ‘if we don’t do it, someone else will’. Did it make a material change for the banking industry as a whole? Maybe not.

Why not? Because payments are just one element of the banking value chain and often not even a sustainable profit-generating element, at least not in Benelux. Payments are the glue between a bank and its retail customers, an important product to create the necessary touchpoints with digital channels, which should result in cross-sales of more profitable product lines.

Did the customer ask for Instant Payments? Some did, The Banking Scene Conference Report showed that 14% of Belgian consumers think it is very important. That is already something, but not a majority.

Will Instant Payments determine for a consumer which institution he will bank with? For some, it will. That same study showed that for 29% of Belgian consumers Instant Payments would influence their choice. That is a big number. Again, it is not a majority, but we are getting closer. To put things into perspective: 10 years ago, we would not have a majority in need of a smartphone either.

The numbers in terms of uptake speak for themselves: in 7 months times, 14% of transfers in Belgium were instant payments.

So perhaps Instant Payments is more important for the industry than we think?

Will we look back to this later and say, “that is what made 2019 so important”? Not sure. Today the industry set a basic framework with a lot of potential. Unfortunately, today, this is still “potential”.

Our Round Table Discussions clearly showed that a lot more is needed for Instant Payments to play an essential, day-to-day role in P2P and POS.

Let’s wait and see what 2020 brings. The new year looks very promising in terms of payment developments. PEPSI may just be around the corner. If the 20 European banks can fulfil their promise with PEPSI, then yes: we’ll think back to 2019 and its amazing news about Instant Payments, as the starting point of something a lot bigger.

On the other hand: PEPSI would not be possible without the essential APIs that are the result of another key development in 2019: PSD2.

Banks are self-promoting their efforts in PSD2 and Open Banking, Fintech keep complaining that banks do not open enough.

The industry resigned itself in the idea that consumers don’t need to know PSD2, they just need to understand the use cases and the risks that come with this new way of banking. I think they are right.

Did anything change compared to 2018? Of course, it did! Most banks have APIs available. I will not dig any deeper in their performance, but the APIs are there most of the time, and testing can begin.

That is new: Tink and the likes can start complaining about API performance, BECAUSE THERE ARE APIS!

Has it changed the industry in a way that “that is what made 2019 so important”? Difficult to say. Like with Instant Payments we can make that evaluation only in the future.

The UK may provide a good indicator for this. They were an earlier adopter of APIs, and experience there shows that in 2–3 years we may be looking back at 2019 and say, “that is when it all started”.

Or maybe the APIs will just have resulted by then in more electronic payments and such a fierce reduction in cash that the first Proofs-of-Concept and research in Central Bank Digital Currency is “what made 2019 so important”?

Is “Central Bank Digital Currency” what made 2019 so important?

2019, the year the Chinese announced their own Central Bank-backed cryptocurrency. That was a wake-up call for Europe to start investigating the opportunities of digital currency.

It wasn’t the first though. 2019 wasn’t the first year either. Have a look at my blog on the evolution of cash in for example Sweden. That blog was from November 2018, with a brief explanation of the e-krona. The project intrigues me a lot, and that is not because the institution that does the research is called the “Riksbank”, but mainly because it challenges the existential reason of a supervisor in the payments space, and why it would no longer be able to play that role with the end of cash.

“The e‐krona could become a modern krona in electronic form as a complement to physical cash. The public could then continue to have general access to central bank money. The e-krona could also be strengthening preparedness, as the private market cannot be expected to take all the responsibility for ensuring that payments function in crisis situations.”

So, 2019 is not the year of the e-krona, or is it? The Riksbank announced only last week that Accenture was selected to create a proof of concept for the e-Krona! 2020 will be an interesting year in the development of this digital cash.

On a European level though, 2019 was a pivotal year for a Central Bank Digital Currency as well. With cash on the decline in many countries, Central Banks need to find an answer on how they can keep a grip on the payments market.

I recently attended a session on this topic. I cannot say Europe is close to answering how a CBDC will look like, but what it showed is the awareness of the topic and the urgency on the political agenda to investigate the opportunities and to make sure Europe doesn’t stay behind the Libras and Chinese cryptos of this world.

Innovation and staying ahead of the curve of financial services were the main driver of PSD2 and the push for Open Banking by the way.

Open Banking was the big buzz in the first half of 2019 and created a lot of promises from the industry to build on Open Banking. Essentially Open Banking is the extension of PSD2.

In my interpretation, Open Banking builds on the PSD2 framework, with APIs being the connection to a much larger scale of opportunities than just payments.

I may be a bit biased with the Open Banking Interviews. For me, 2019 will probably be the year of Open Banking. 2019 is the year of the first concrete steps to a new way of banking in my opinion.

We’re not there yet. The industry did the first steps in the right direction, just like it did with Instant Payments, PSD2 and CBDC.

As you can read in the interviews, 2020 could even have a small Open Banking Winter, a period of reflection and learning on how do accelerate this evolution towards a new way of banking.

Today we see the first banking platforms, with services that go way beyond banking services, as the Chinese examples. KBC, Hello bank! and CaixaBank are just a few of them.

We start to see the first examples of bank integrations in external platforms, closer to the customer (Didid, Tikkie App, Yolt…).

We also hear louder voices to watch out for Big Tech in a situation where banks are forced to open up without a clear political vision on the future.

Karel Van Eetvelt said: “The philosophical questions on a European level that should be answered are “What is our long-term economic vision for Europe? What players should play which role?”. I will be very clear here: I miss a clear vision at the moment. It makes me anxious.

I think we are currently implementing PSD2 without a clear economic long-term vision. If the result of the regulation is that small players can no longer survive and that only big players stay in the market, strangled in international superpowers based outside the EU we as a continent lose our autonomy. Even the big European players will no longer be able to compete with these international superpowers and they will be taken over.

Not only would we lose diversity, but also our sovereignty.”

Talking about politics, perhaps we should not neglect Ecology in the whole discussion of 2019?

Is “Climate Change” what made 2019 so important?

This is certainly a big trend! I’m not saying because of all the headlines, but mainly about the impact that it will have on the industry. In all parts of the value chain of banks, ecology starts to play a big role.

New investment funds start focusing on green investments, we see new banks whose USP it is to focus on a greener economy (Like Tomorrow: a 100% digital sustainable bank), we see organisations selling credit cards that promise to plant trees for every X € spent (like bunq), there are investment products with the same features (like bpost bank)…

These are just small bits and bytes that surf of the hype of ecology. Guess who was the first to demonstrate this? The Chinese Alipay. Their AntForest is already 3 years old.

In the same field, there was also the news of Rabobank that caught my attention. They were in the process of moving into green energy production! As the end, they didn’t acquire Eneco, but a clear message was made to the outside world: “We Care About a Greener Future”.

The real shift for the industry came in Q4 of 2019. The first one being the European Investment Bank that decides to stop face out fossil fuel financing. Although many critical voices found loopholes and think the institution isn’t going far enough, this is clearly a statement from the industry. EIB will invest 1.000 billion in sustainable energy projects between 2020 and 2030.

This will also have a tremendous impact on the private sector, as EIB is a recurring reference investor for big projects. If EIB invests in a project, it is easier to find other investors as well, like the more local banks.

The second big news item towards a greener banking industry was the political decision of the Green Deal. The Green Deal will redraw the European Political Agenda. If Europe wants to become energy neutral by 2050, it will need to invest massively in research and development, in sustainable energy and housing projects, in public transport etc…

This will also change the strategic agenda of banks. So maybe, 2019 will be seen as the start of a greener future.

What do you think?

Do any of these scenarios also reflect your idea on 2019?

Or should I have added any of the following?

“Challenger banks become challenged by a new generation of banks” is what made 2019 so important.

“Big Tech — Bank collaboration” is what made 2019 so important.

Should we add another one?