The war on cash: National Banks Strike Back

Last week I blogged about contactless cards. The title started with “The war on cash”. This confused quite some readers, according to the comments when discussing my blog of last week.

Interesting stuff, and good inspiration for a new blog. My new post will be dig deeps in these comments and concerns on the increasing digitization of payments. What is the impact of a cashless society? Why is this still a controversial topic for some?

When combining ‘contactless’ and ‘The Netherlands’, many readers recalled the fear of a cashless society, triggered by a communication of the Dutch Central Bank (DNB) earlier this year. That led to a whole discussion on Reddit, in a completely other direction than the discussion of DNB.

DNB is concerned about the decline in the use of cash because the light-speed evolution of digital risks to generate a new kind of financial exclusion. Exclusion of the digilliterate: people who (I) have no or limited access to digital services one way or another, or (II) do not understand how to work with it, (III) cyberphobics.

Yes, there are still people that do not understand how to work with digital services. These people are locked out of regular daily life every time they see:

DNB was especially concerned about the first group of digilliterate: people who have not the right access to digital services. For these people, cash is often the last resort to participate in society. Elderly people with dementia, immigrants or less educated people cannot survive in a cashless society without the right support. Being able to make payments provides basic access to society.

For these people, cash is often the only way they are able to make a payment. This could be for various reasons: because they do not know how to work with the technology, or because they have no access to this technology. Public transport and also shops are increasingly pushing for electronic payments, up to a level where they no longer accept cash (like Amsterdam’s public transport).

This is not only an isolated Dutch protest by the way, nor the only country where these concerns were raised.

Sweden reached its tipping point of cash in 2007. Yes, 11 years ago they had the highest level of cash in circulation. Since then, cash in circulation is in decline ever since (going from 95 billion in 2007 to about 55 billion in 2017). According to Dr. Niklas Arvidsson, the country that “may be practically cashless by 2023”. Although this is an exceptional situation, it is hard to believe the rest of Europe is not evolving in the same direction. 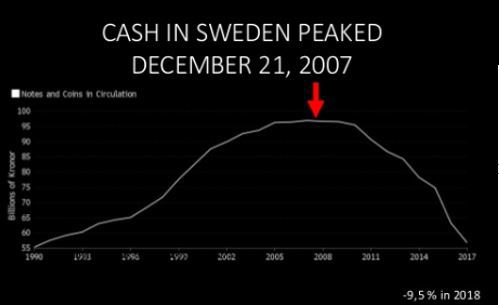 Besides the less educated and seniors can suffer from this evolution, also tourists with the wrong payment mean. In China, for example, a country where Visa and Mastercard are not widely accepted, arriving there as a tourist unprepared can be a very inconvenient experience, as Chris Skinner described here.

Then you have the arguments that are more related to human society’s dependency on technology. Cash is an easy means of exchange, it is one that does not require energy, that does not require software to execute a value exchange. It is a means of exchange that is not affected by a possible electricity break down of a cyber attack. “Cash provides trust”, as Petra Hielkema said recently. You can even pay with it in the middle of the Sahara.

The Visa outage on June 1st this year resulted in +5 million failed transactions. That is: +5 million times a consumer did the effort to purchase a good or services, and realised, just at the end of the purchase, that he has to come back another time, or use another payment mean, like cash.

Although these are exceptional situations, this one triggered many National Bankers to warn governments about the risks of a cashless society and to forget for a minute the huge cost of cash. David Birch cited a study in his latest book that estimated that the complete cost of cash for the European Union is about 130 billion € (the sum of the societal cost and the private cost).

Now, what was the discussion on Reddit about? “A cashless society is a dangerous society”, they said. Most arguments were similar to the ones above (no payments during a blackout, everyone needs access to a bank account, the POS machines must work,…). The guiding theme though was the lack of anonymity in the world of electronic payments. Makes sense… but is this a problem, really? Consumers are already giving away their lives online through Facebook, Google, Apple,…

To make his point, one guy stated: “Prostitution is legal in the Netherlands and imagine what would happen, if the wife of some dude who paid with his card for sexual favours, gets caught because the wife sees the transaction to SexyCandy Inc. in the history of the online shared family bank account. This is just one of many scenarios I can come up within a cashless society.”

I’m sorry, but paying with cash is not enough to avoid your wife of finding out that you visit prostitutes: the simple use of his smartphone and localisation services is already enough.

That said: Sweden is getting really close to becoming a cashless society. 2023 is only 5 years away. Jonas Hedman, Niklas Arvidsson and Björn Segendorf estimated that March 24, 2023 will be the tipping point where cash is no longer a generally accepted means of payments.

All things being equal, March 24, 2023 will be the moment that private banks get a monopoly over money management in Sweden. If the Central Bank does not do anything, it will no longer be able to play the role of the promotor of a safe and efficient payment system. This could lead to a concentration of the market, with price increases and an inefficient payments system as a result.

Things may not remain equal though. Riksbank is currently investigating the possibility to make available the e-krona, a Central Bank issued digital currency.

The e-krona would be offered directly to the private market. That should offer Riksbank the necessary gunpowder in case of a serious (financial) crises when private banks are no longer capable of supporting financial stability. It could also play a role in stimulating competitiveness and innovation in the payments services industry.

The idea is that e-krona could be held in an account, as well as on a card, on a mobile phone, just like with cash. This allows for Riksbank to have a direct impact on society. This will guarantee the right level of liquidity in the market and sufficient competitiveness between private institutions.

The project of e-krona is currently still in a study. It will be interesting to follow up on how this further develops in the future.

Looking back at this blog post: what is needed to have a good functioning, cashless society?

- A reliable payments network that stimulates innovation and competition

- Easy access to the network to every participant in society, both consumers as business entities

- An undisputable understanding on how to act on the network

Let me know what you think or reach out on social media — I’d love to hear your thoughts.