Our first CEO in the Open Banking Interviews is Ali Niknam, a man with a plan. He founded bunq, a Dutch challenger bank, in 2012, and got its banking license in 2015. Ali is an entrepreneur with a technical background.

A good example of this is the announcement just last week that bunq is opening an API marketplace to showcase apps built using its own proprietary API. 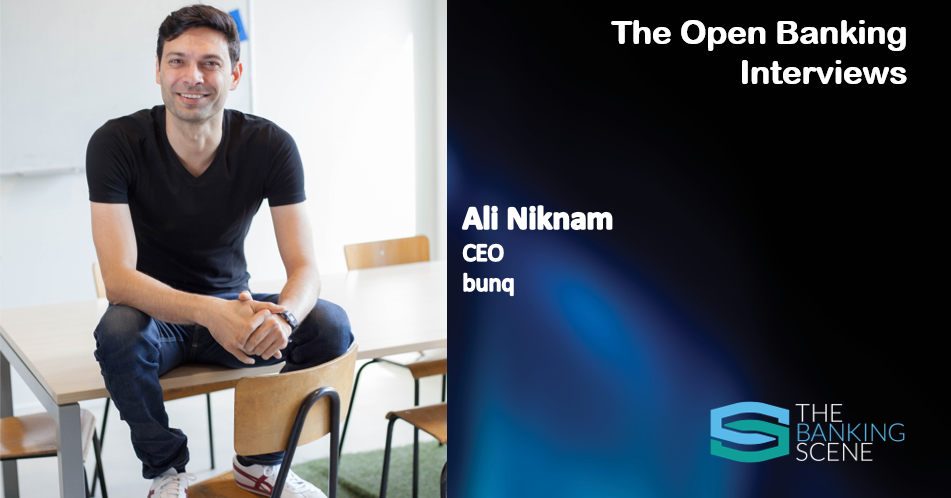 Most people know bunq bank as a challenger bank with technology being engrained in your DNA. This probably explains why you were so well ahead of the curve when it comes to API adoption. In March 2017 already you had a sandbox live.

Why did you decide to open up so early?

The world is so much better with APIs. You can interconnect with all kinds of services. You unlock all kinds of creativity. So I think maybe that’s what’s wrong in this industry: that we question why we should do things in our industry that are standard everywhere outside of the banking sector.

So to me, there is no doubt in my mind, or no question, that we would want to do this. The only reason why I wouldn’t have done it was if somebody would have come with this idea or reason not to, but nobody did. Nobody did because there was no reason not to, so we did.

Innopay, a Dutch consultancy company and an authority on Open Banking, is often referring to bunq as an example for the market towards PSD2 and the way you promote your APIs. I read the same on www.programmableweb.com as well. Does this currently also translate into a lot more creative integrations and effective usage by customers? Or is the market currently still waiting for also the big players to open up?

We have the only truly powerful real-time RESTful API in the world. This allows for all kinds of things that no one else can. Now, unfortunately, PSD2 has been trying to enforce openness to players in the industry that don’t want to open up.

As a result of which there is no clear standard and the standards that are emerging are, from a technical standpoint, subpar. They are more the result of a political consensus prompt process instead of the result of thinking what is truly best for consumers. I think that’s a shame.

I see PSD2 in fact as a starting point towards a whole new journey, the one of Open Banking, which goes far beyond PSD2 and even payments. I call it the journey to ‘everywhere banking’. How do you look at this? Are we moving to a completely different way of banking?

bunq is, was and will continue to do so, for as long as the law allows us to. I think the problem with PSD2 is that it’s trying to enforce something from an industry that is just not having the right mindset, that is not ready for it and that is often not capable of it.

I think that, after being in this industry for 7 long years now, the way to truly open up the market in Europe and to truly make it a consumer-oriented, we just need to apply very simple reasoning. It is one that we also apply to telecom companies and electricity companies, actually to most companies.

How weird is it that in 2019, a bunch of people has to sit down and mandate a law, a guideline, for the industry to transfer something that everyone else has been doing for over a decade?

So rather than having to continuously and rigorously apply a dogmatic law like PSD2, the only thing we need to do is to enforce the standard that allows you, as a consumer or as a business, to change banks without hassle across Europe.

Because what we then unlock is the possibility for consumers to decide what is best for them.

All the banks are offering the same thing, except for bunq obviously. They literally have nothing to lose as they are roughly speaking on par with each other and they are protected from true innovation by all of the rules and regulations. The backstop of this protection is, of course, the complexity that banks have consciously thrown up to prevent people from switching.

Just the other day, I spoke to a friend of mine who had a bunq account and a KNAB account and she was so much more satisfied by bunq because we surpass just banking. For entrepreneurs, we basically help you to save time by reducing manual tasks.

She wanted to cancel her KNAB account. Guess what… It took her 4 days: emailing back and forth, signing stuff, looking up stuff, sending a copy of your ID. I mean, if someone is willing to switch banks has to spend 4 days of her life, we cannot be surprised that not more people are switching. So we need to address this problem and this will solve all the other problems.

Coming back to your question: how will the future of banking look like I expect that in the coming 5 years not a lot will change. Banking will still look pretty much the same. In 10 years, it may be different.

In 10 years, perhaps, if sufficient people inspired lawmakers to apply a different strategy, interesting things might happen. Very interesting things, which are difficult to predict because it’s such a regulated industry, so it depends on how far you can go with creative thinking.

I think there would be many crazy ideas that would probably bear fruit, one or 2 of them that we cannot predict, today.

To give you an example: one of the people who work behind the scenes on our API, she had quite an interesting idea. She started visioning the idea of money not being a stochastic thing that you get once a month and then spend the 30 other days of the month, but for it to be more fluid, in a more continuous process.

This was a very interesting idea, just to say that by changing the technology you can change the essence of money. So, for instance, you wouldn’t get your salary once a month anymore. You would get it continuously and then you wouldn’t buy a TV once every 3 years anymore because there would be all these money flows going on and everything’s real-time.

So many things are possible, while today most of the banks are still working in batch processing and overnight stuff. Now, if we would open up the market then we would see so much innovation happen.

By opening up, I don’t mean deregulated. Money has a special place in society, so it needs to be regulated. I just think we need to change the strategy towards where the regulation is going, allowing for innovation to happen and for creativity to happen while keeping everybody safe.

I think it makes sense, and like in many interviews it all comes back to changing mindsets. I also like the idea of your continuous salary as well. It creates a lot more logic when linking effort with the benefits you get from it. The idea resonates well with the Gig economy by the way.

Our next question: what do you see as the main driver for Open Banking: data or APIs? Or do you see these 2 elements in balance with each other and only relevant when using them together?

I think it depends on the use case. One of the advantages of PSD2 is that at least you will have some kind of openness on a scale so that some things will happen. If at the end of the day, you would be able to connect to your bank account as easily as you can set up Stripe, for instance, it would make a real difference, just look at the toolsets that are available for credit cards today.

I think that truly exciting things will happen once we get there. Technically speaking it is already available today, through bunq for instance, but it really is the regulation that is complicating matters instead of helping things forward.

What we are effectively doing is we try to have a centralized economy, communism so to say. If you really think it through, the parallels are there. We know that communism was invented and created with the best of intentions and with the highest ethical regard, but it just didn’t work. And capitalism, with all its failures, seems to reasonably work, right?

I think what we need to do is have a very clear set of rules and regulations to keep people safe and that keeps your money safe. Outside of those boundaries, companies need to have the room to be creative so that they can come up with all kinds of things.

These older gentlemen, because these regulators are often men, cannot think all this technology through with their grasp of the world, because by definition if they could they probably would have been entrepreneurs or creatives and not regulators.

I think everybody needs to do their job: regulators need to keep the public safe and allow innovative services at the same time and creatives need to follow the law and then be as creative as possible.

In banking, things are too much intertwined today unfortunately and too much at the downside for everyone.

We touched on this question already quite a few times, but in terms of next-level Open Banking: what do you see as key trends for 2020 and beyond for consumers?

I frankly don’t know. I think IF PSD2 kind of works, which I’m still not entirely convinced about, It might be interesting and we might see some creativity here and hopefully this will inspire some more openness. Today it’s difficult to say if this will be the case.

I mean, PSD2 is created with the number of calls someone can do during the day and the interface is not standard, it is not RESTful, not real-time… I don’t know, I have my doubts.

Looks like you do have a few things in common with other bankers I interviewed: it will be a period of learning and evaluation. Would you answer the same when I ask you for the key trends for 2020 and beyond for SMEs? Do you see any differences in this segment?

Quite frankly not really. I wish there would be some space because we have tons of great ideas. Unfortunately, we spent 80% of our time implementing rules and regulations and PSD2 stuff that just doesn’t make a lot of sense.

Now I don’t want to sound like a stuck record but in my opinion, the one thing we can introduce that will make a significant the fundamental change is the ability for people to change their banks as easy as they can change their phone numbers.

That’s it! The day we introduce that is the day that we will get, within 12 months, tons of innovation! I promise you that alright!

This story is part of a series of interviews with executives of the financial services industry.

The complete list of Open Banking Interviews can be found here.

Make sure you follow The Banking Scene on LinkedIn, and subscribe to our newsletter for the latest news.