Predictions for 2021: Interview with Chris Skinner, his Elephant in the room and the Bird 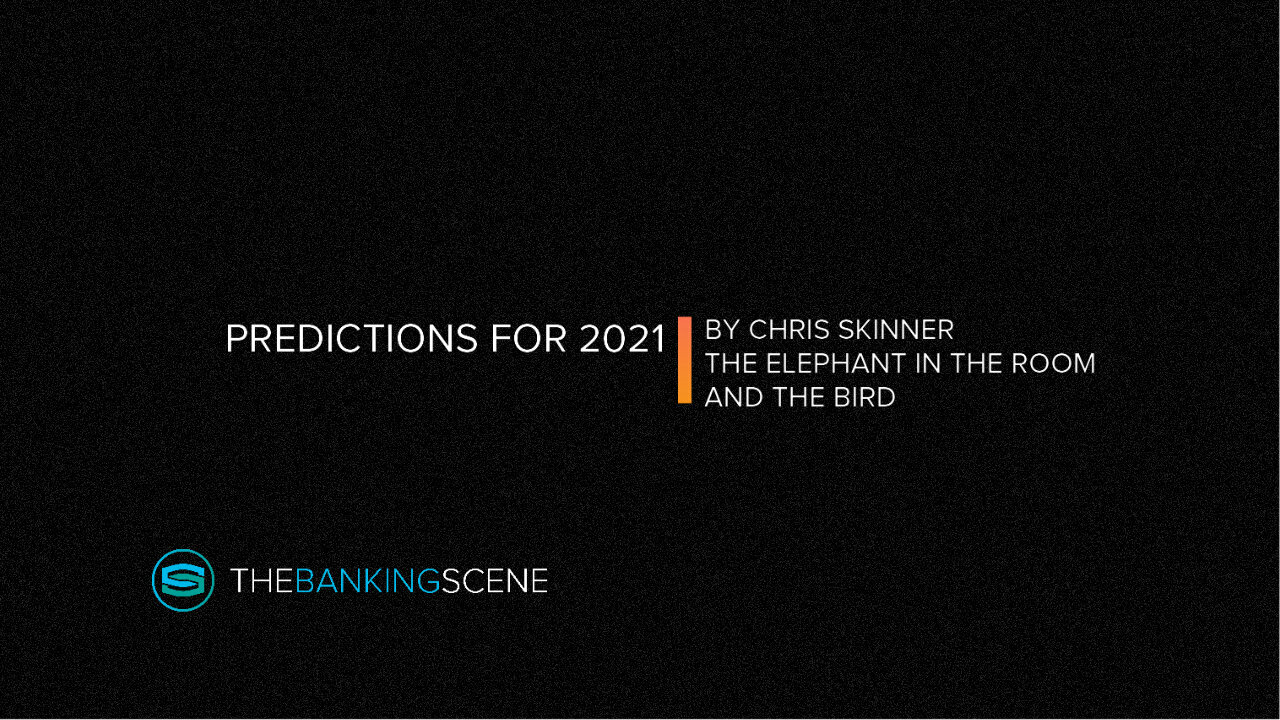 2020 was an exceptional year. Luckily, some certainties remained, like Chris Skinner’s daily updates on our industry, on fintech and the economy in general.

However, even there, you and I have noticed a few particularities in the blogs. Take the example of the Fintech karaoke series, and Chris’ conversations with the Elephant in the room, who represented the economy, and the Bird. The Bird only spoke in Morse, and he represented the future. You can find these blogs here: part 1, part 2, part 3, part 4, part 5 and even part 6.

In the beginning, I thought ‘is he getting insane?’, being locked-in at home for too long. Yet, the Elephant and the Bird did send a few very insightful messages on the future, our economy, and what is going on in our day-to-day life.

That is why I asked Chris if I could raise a few questions to the Elephant, the Bird and Chris himself about 2021. He was so kind as to agree, so here we go.

Elephant, what do you think will happen to you in 2021? Will this be the year to move on, to leave Chris’ room?

Chris: “Happy New Year Rik. The Elephant is over there. I can’t show him, as I think I’m the only person who can see him. But I’ll ask him.

He’s kind of not sure. H’s saying to me that 2021 will be another year of massive change and challenge and that everyone has to focus on developing digital businesses.

He is worried that the good times will not role because so many people are not ready to be digital. This is not just in banking and finance; he is worried that people don’t get the digital message.”

How do you think this will impact the banking industry? Is it time for the newcomers to really take a stance against the incumbents because they don’t understand digital?

Chris: “The Elephant doesn’t want to comment, but I’ll ask the Bird.”

Chris: “The Bird is probably more intelligent about this because the Bird knows more about what’s coming.”

Chris: “Basically, the Bird is saying that the banking industry has ignored technology for too long and not really embraced technology as it should.

Basically, the banking industry is going through one of the biggest changes this year, and maybe an example comes from one of the challenger banks. They created savings abilities for their customers. Through IFTTT they allowed their customers to save 25 cents for every time they click a like on a Tweet. This then builds into a pot of money which, for example, the user might use to buy themselves a special gift.

It is kind of that kind of stuff that challenger banks really get. They understand this, along with the other types of machine learning and the big banks, to be honest, they could not offer that to their customers because they ignored technology. Full stop.”

Small remark here: in my observations, ING Australia was the first to offer this kind of IFTTT savings possibilities.

Chris: “Yea yea, there are some big banks that get the message.”

Chris: “Some banks do get it, and big banks do have a future. The issue I think what the Bird is saying is that the big banks that don’t adapt will not survive in the future. So ING, and some other banks, like the ones in Doing Digital, in my book, BBVA, JP Morgan.. do get the message.”

They are trying really hard to adapt.

A question for the Elephant now: which sectors will change in 2021? Which will really push digital forward as a result of their experiences and the consequences in 2020?

Chris: “He is kind of saying what we all know, which is the experience of 2020: this will continue in 2021. The companies that were geared up for digital delivery and distribution will continue to survive and thrive.

It is kind of obvious, and you know this Rik, from your conferencing and networking business: we had to augment our services with video and online services. We cannot rely on physical networking anymore.

The airline industry is going to struggle, retail, conferencing, hospitality, hotels, all these industries will continue to struggle, and many of these businesses will disappear, the Elephant says. If you look at online services, particularly networking services, that will be the breakthrough success model for the future.

Actually, I posted this morning that Jeff Bezos increased his wealth with almost 200 billion USD over the last year, it almost doubled. He will continue to make money.”

Thank you very much. Chris, is there anything you would like to add personally for 2021?

The clear factor for me is that during 2020 and continuing in 2021 there are some companies that obviously even now are not handling digital reach very well and there are companies, when the great unlock happens, which I often talk about, will probably find that customers really do start to move in different directions.

A lot of customers don’t move out of their banks today because they are worried about the risk of moving. When the great unlock happens, I am pretty sure they will move.”

Chris: “The Bird is saying to me that he is not confident about challenger banks because he thinks that they don’t do enough that is different.

The big issue is how to do banking in a different way. From my own experience, and I guess why I am now down on this, regulation will now move to the specific transactional thing you are trying to achieve. Rather than a banking license, we move to a payments license and soon to an online payments license and an API license for our payments, where an API payment is related to a loan.

We will move to much more microservices in financial services, and it is the Banking-as-a-Service model that I have spoke about for a long time. Regulation and companies will move to specific API app analytic that they are delivering on to a platform. That is then integrated and aggregated by brand players that actually know how to do these things well.

Sorry, hold on, I hear the Elephant.

The Elephant is saying that he doesn’t like this. He doesn’t like change; he wants everything to stay the same as it is, just like most bankers do.”

Right, but I do think, and that could be a good thing for the Elephant, that the topic, that is very high on The Banking Scene’s agenda in 2021, and I also believe on yours, is that purposeful banking, where banks need to look further than just technology is a big opportunity for the economy. Just look at the amount of money that is being invested in ecology. This will boost the economy in the coming year, perhaps less in a consumptive way, but for sure in terms of investments.

Chris: “Three factors come into play here. You and I talked enough to know where I am coming from.

One is obviously digitalisation and the effects of the internet and the network on how we deliver financial services.

The second is the view that financial services are not delivering in the customer’s interest, and that is particularly true for Gen Z, Millennials and new populations coming through as customers and employees. They want to see that you focus on me and what I need, instead of you and your products.

The third is what you just alluded to, which is financial services, and all companies and governments have to have more of a purpose than just making a profit to grow the economy. They need to deliver things that are good for society and good for the planet. The Netherlands, particularly, is a leader in this field, with the Green Party in focusing on making environmentally sustainable products that are now becoming pervasive in all developed economies.

Purpose-driven banking, working in the interest of the planet and society through digital technology delivery, is becoming a really major theme that I am focusing upon. That is the theme of my next book.”

Thank you very much for your time, and I look forward to read a lot more from your blogs in 2021.

Chris: “the Bird is just saying he wishes you well and a have a great future. And the Elephant says the same, and he also just dropped something smelly.”