Decentralised Banking: Are We There Yet?

It took Bitcoin 12 years to grow from an underground experiment to a parallel network of cryptocurrencies that is being taken seriously by entrepreneurs, futurists, technologists and increasingly more also by regulated financial institutions and even regulators. The experiment was based on the blockchain technology.

Although I am a cool lover of crypto, it was simply impossible to ignore the topic during the Afterwork sessions. We were lucky to have Jo Vercammen, Chief Technology Officer at Meeco, who joined us on July 23rd. As a blockchain and cryptocurrency pioneer, he set up multiple ventures, the first one being in 2013.

Even though his involvement in the cryptocurrency and blockchain industry to less today than before, his natural curiosity as a former lecturer at HOWEST University of Applied Science in this technology remained.

Before giving him the word, we let the audience speak. We asked them in a poll how they feel about the three topics of today: blockchain, cryptocurrency and Central Bank Digital Currency (CBDC). In short: crypto is the least trusted of the three, and CBDC is the most underrated one: high potential, but we are not entirely aware of what it can bring. Blockchain has finally left the hype and is being taken more seriously. 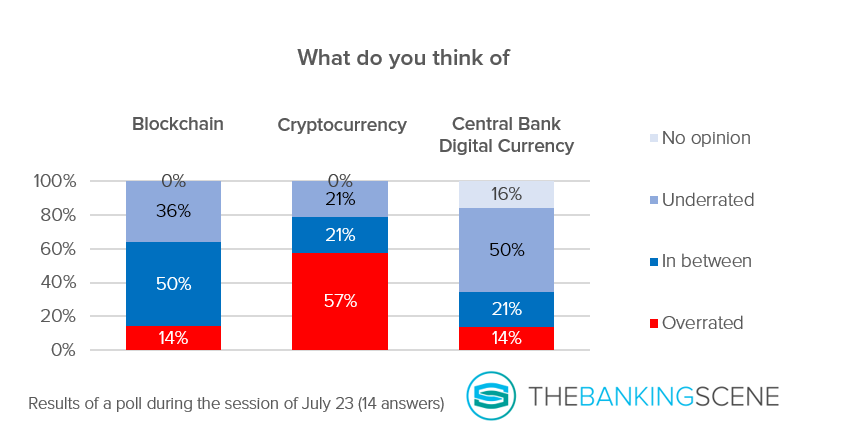 All pieces coming together for crypto?

It is hard to predict the size of the cryptocurrency market today, but the opportunities from crypto today are more prominent than ever. The market grew, the regulator responded and regulated institutions increasingly welcome crypto as part of their business.

Jo acknowledges that crypto in Europe may remain a marginal phenomenon. The opportunity of crypto has always been in markets that lack a stable currency or a developed payment system. It was, and still is, a safe haven in weak economies.

You could argue: what problem is crypto solving in developed regions like Europe? This is a critical question, one that results in heated debates that often sound more religious than professional.

UNICEF is turning to cryptocurrency in the fight against Covid-19; the office of the Comptroller of the Currency in the United States has given the green light for banks offering crypto custody services, and Mastercard granted Wirex a Principal Membership, as the first native cryptocurrency platform that can now directly issue payment cards.

Eftpos Payments Australia is rolling out a stablecoin based on the Australian dollar, the low cost of settlement per transaction being the driver. Applying stablecoins allows them to settle every micropayment individually, supporting newspapers, for example, to set up pay-per-click services with a payment for every single click instead of one statement per month.

The cryptocurrency community learned, collaborated with regulators and took a lot of initiatives in the last few years to more transparency.

Jo: “The new Anti-Money Laundering Directive curates a path to on how to organise a serious crypto business. I think before it was more the Wild West, where we were cowboys organising the laws by ourselves. Now we are getting into more regulated space, which is really good to do serious business. The biggest problem is not that a bank does not want to be involved in crypto. No, the biggest problem is compliance. Compliance does not want to take any risk.”

Jo thinks a lot of banks and payment providers like Mastercard were waiting for a better regulatory framework to start embracing crypto, and now we have that in Europe, we can expect more announcement like this soon.

The latest buzz is CBDC, Central Bank Digital Currency. European Central Banks put a tremendous amount of effort in this, realising they cannot stay behind. Under the pressure of Facebook, China and the steep decline in cash usage in some countries, they are investigating the possibilities of a digital euro.

With some countries more advanced than others, Lithuania launched its first CBDC on July 23rd, LBCoin. Agreed, today it remains a digital collector’s item, but it symbolises the ambitions by the central bank to speed up the digital currency developments. With the lessons learned, they will quickly set up a more mature infrastructure soon.

Earlier, the Banque de France tested the opportunities of CBDC in the wholesale business. They are currently looking for partners for the integration of a Central Bank Digital Currency (CBDC) for interbank settlements.

CBDCs are more regulated, with the most supporting sponsor, in this case, being the supervisor. Thanks to their direct link with the national currency, there is no speculation in place, leaving the door open for values added services instead of merely investment purposes.

According to Jo, it makes perfect sense for Central Banks to provide their own digital currency. Jo: “it is their job to provide liquidity to individuals, separately from banks. They should not give all the authority and power to the banks. In a 100% cashless society, all that power of providing liquidity would go the private banks.”

CBCD can overcome the problem of banks getting to much control over the economy when people stop using physical cash.

What followed was a lively debate between the people that understood the implication for the bank as we know them. Some reckoned it is a serious threat to banks, and they may be right: providing each consumer with a Central Bank account would completely transform the way banks do business.

With today’s crisis in mind, Jo sees an opportunity in CBDC for central banks to support certain critical economic functions with higher risk loans that regulated banks would never consider. One could argue whether that is the role of a central bank or a government. Nevertheless, it creates a window of opportunity and an even bigger window for more discussions in the future.

A lot more dialogue with the industry will be required to understand what the possible impact will be on the current business model of a bank. How do you deal with the lending business once deposit-taking is partially taken over by central banks, for example?

Blockchain: the hidden winner of the block and chain business?

It is revealing that people no longer talk about blockchain like they used to do a few years ago. Blockchain left the hype phase and matured. Today, organisations look at the requirement for the use cases they need, and they turn to the blockchain if that adds value. In the past, this was the other way around: people investigated blockchain, and they looked for use cases to show they ‘do blockchain’.

Jo: “We are now at the crossroad. We see that with some projects already live, given Belgian examples like We.trade in trade finance, Kube in SME banking…”.

Private blockchains failed their expectations. Jo: “Creating a consortium of banks to recreate a centralised entity that manages everything does not work. If it does, it can take years to find an agreement with all parties on the architecture and governance. It is better to have something in the market before you start looking for partnership than the other way around.

Meeco is an identity and personal data management company. They currently do not use blockchain for the digital vault at KBC. They just store all the personal data in a secure fully encrypted data enclave. They used blockchain for some use cases elsewhere, but it remains minimal. Right now, they are investigating how the next best thing, the “zero-knowledge proof” can add up on their services, which they see as the next step in identity and reputation management.

What zero-knowledge proof want to solve is that you can initiate a transaction that requires your identity, without giving your identity before the deal is executed. With a progressive way of providing information during the operation, you increase the trust step by step, with only the elements necessary in each step of the process.

These are exciting times. What this session showed me is that our industry needs more time to understand the implications that a more decentralised banking industry could mean. Whether that is by introducing CBDC, other use cases like private stablecoins to optimise the settlement process or blockchain-based smart contract, it will all impact the way we look at financial services in the future. It will create increasingly more automation and endless new opportunities. Luckily, we learned that more automation would allow all of us, active in the banking industry, to have more time for creativity, more fulfilling jobs and higher employee engagement.

The good times are ahead of us!

Share this via
Graph opinion on blockchain crypto and CBDC