Apple Card is about digital identity, not about payments

OK, you got me. You are right: I publicly stated that I would not write about AppleCard after reading this blog by Brian Roemmele. This was thus far the most complete and detailed post I found on the topic. From there on everything seemed to be said.

Most posts on Apple Card were talking on a rather superficial level about how cool the card is, or stating banks should be very afraid of this next step by Apple.

My first reaction on Apple Card

My first reaction on Apple Card was rather one of disappointment, and I was not the only one (Brett King said it on Linked, Bianca Lopes stated it on stage at Know Conference…). After all, in terms of payments experience, product design or pricing this was not the revolution like we know Apple.

Making a payment with a credit card remains pretty similar, and in some cases even worse. Imagine you would like to make a payment for an e-commerce transaction on a desktop and you need your card number, expiry date, and CCV code. For any other card, you pick the card and you tap the numbers (or just CCV if your desktop already knows the other data). Not with Apple card: you always need your phone because every new transaction generates a new virtual card number.I agree: some elements are superior to what others provide, as the real-time follow-up on spending. But I think we can agree that this is not truly revolutionary, and not something other players cannot copy very quickly!

Many other banks and retailers see the credit card as a loyalty mechanism with often even higher cash back %s than what they get at Apple Card, especially in the USA. So that is not the true differentiator either.

Apple is not the first to offer a titanium card, with nothing more on the card than the name of the customer, Apple logo, Mastercard logo, a chip, and a magstripe.

Guess what: they are not the first in the USA to issue a card without a card number on the front of its card. Last week I visited by accident my brother-in-law, who lives in the USA, a few days after the announcement of Apple Card. He is not into payments at all, nevertheless, we discussed Apple Card. He showed me his Amazon card, another card with a clean front. 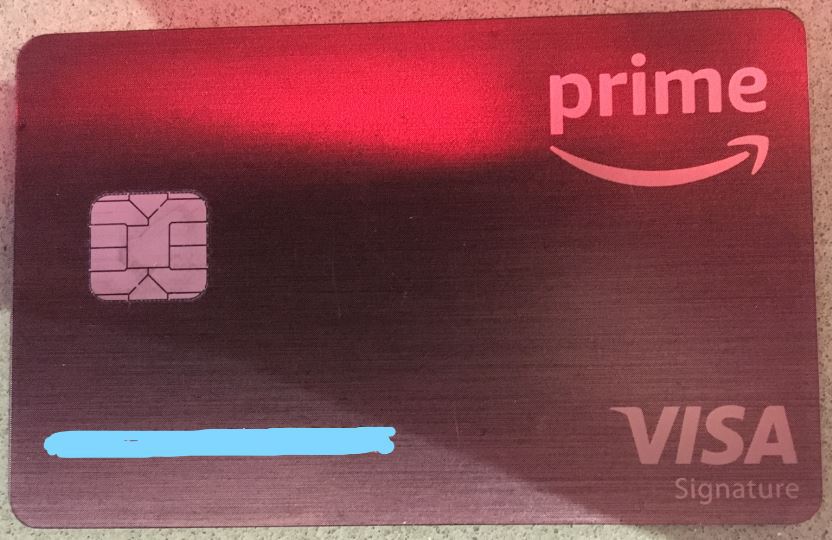 I agree: they still show the card number at the back of the card, which is, in all honesty, a bigger added value than that it is a risk, given the chargeback possibilities in case of theft.

So no, I decided not to dig too much into Apple Card…

Until a new theory bumped up in my head, of what Apple is really trying to do. I may be influenced by the conference I was attending at the moment of the launch, but I think the bigger picture may not be about disrupting payments!

Apple has always been a leader when it comes to privacy. They are often more expensive, and the customer knows why: compared to Google and Facebook there is the perception that the data on an Apple device is safe. With Apple Card that is not any different: your payment history will not be shared, and will only be saved on your smartphone.

Just like with Apple Pay, every new transaction will create a new one-time virtual card number for extra security and privacy. So based on a card number it will be impossible for merchants or any other institution to reuse your card data to make new transactions.

With Apple Card, it is no longer needed to have an external payment product to make Apple Pay possible. Apple can keep all the transaction data personal and inside, within its ecosystem. Apple will be able to make a complete profile of its users in a safe environment.

People like David Birch are explaining for years that banks have a role to play in the game of the digital identity.

In short, the main reasons why banks should take up this role are:

- Banks have very strict regulation on KYC and AML, and identification of customers is done through a very well developed framework

- Banks know the ins and outs of a customer

PSD2 is pushing banks even further into that direction.

This is exactly the game where Apple has a huge opportunity. Today they rely on a bank for customers to link their credit or debit card. From the moment that Apple can issue its own card, this is over. So of the above mentioned 3 points, Apple can take ownership over all these elements, except perhaps of the first one.

And that is OK, Apple will still have to link its credit card to a current account. That is free of charge, KYC service from banks for Apple, just to comply with the regulation.

This is an important little detail, because with the customer profiling that Apple can generate today, and tomorrow with the payment details, goes way beyond what regulation expects. With all the services in its platform, Apple has so much more than any financial institution can provide. They can link the physical with the digital identities.

You are right: they will not sell the data, but that doesn’t mean it has no value. More on that later.

Authentication was not an issue anymore. Fingerprint and face recognition are already provided for Apple Pay and they will now be extended to Apple Card payments. Why not open it for other opportunities?

Once Apple also takes over most of the payment flows (except for one every month) it starts to take over the bank’s possibility to profile customers, to score customers. This will not only erode the cross-selling opportunities of a bank but even more so: it kills a proper identification of its customers.

Banks will start losing grip over their customers and they can no longer provide the services they want because they no longer know what services a customer wants.

So what is the real game that Apple is playing?

I think the real game Apple is playing here is that they seem to be turning the game into a situation where the banking sector becomes dependent of them, instead of Apple begging for bank relations to support their Apple Pay.

I am still not convinced that they are interested in becoming a financial services provider. The real game here might be that they become a true identity and privacy provider.

Apparently, they already know how to score their customers for a credit card, so if they wanted, they could have stepped into consumer credit. Amazon already showed the ease of setting up current accounts with a bank, so this seems not to be a priority either, otherwise, Apple would have done it already.

So my belief is that they become a digital identity and privacy provider.

With Apple Card, they connect the dots of their customers, the developer portal, their merchants, up to their different services. All these services require identification, some more stringent than others. In other words: they know the game of identity. Identification, Authentication, and Authorisation are not new concepts for Apple.

From the moment they release this kind of services to the wide world of online shops, platforms, websites… that only requires a reliable identification WITHOUT providing a complete identity or profile they opportunities are huge! A lot of web shops or website are perfectly happy with that! May don’t need any additional marketing data etc… they just want to know that you are who you say you are.

What keeps some of us away from identifying ourselves with Facebook or Google? Why are we more willing to identify ourselves with players like itsme (in Belgium)?

Right: because we know that Facebook and Google are unreliable when it comes to privacy and because we have more confidence in a player like itsme, who are supported by banks.

Consumers can use itsme by linking their national ID card or their bank relationship with itsme. That is how itsme is certain that you are who you claimed you are.

Why shouldn’t Apple be taking over that role in the future on the iOS platform?

Last week at Know Conference 2019, Mastercard explained what digital identity is about: 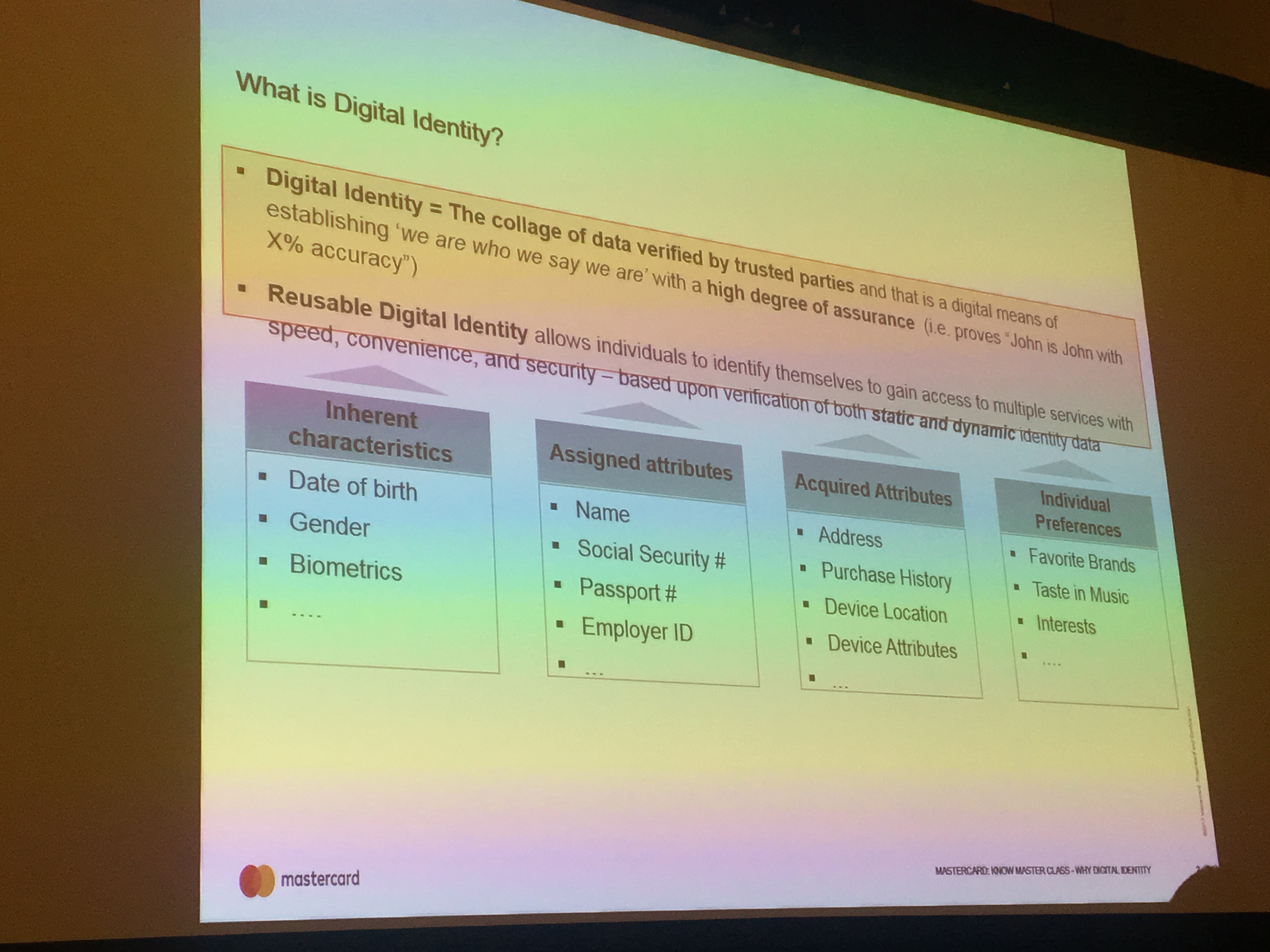 Can you give me one of these elements that Apple is not able to do from the moment they take ownership of the credit card for daily consumption?

If there is anything where I got too fast, please let me know as well. Identity is a relatively new domain for me, so there is a lot more I can learn from you readers for sure!