Last weeks there were 2 news items worth discussing:

- Belfius has its API marketplace made public. This is a huge step in the direction of a more innovative, and more competitive market, in line with the ambitions of PSD2

- bpost bank communicated price increases, including a fee per cash withdrawal for the free of charge b.compact account

Unfortunately no one saw the sense of urgency to discuss the huge step Belfius did for a more competitive payments market.

We are at the start of a possible huge transformation of the market as we know it.

Yet, the most important news was that worth discussing, for two days on a row, was: some consumers with a free account at bpost bank need to start paying for their second cash withdrawal in a month, even at ATMs of bpost.

That is right, this means:

- not EVERY consumer, only the minority with a free of charge b.compact account

- no EVERY cash withdrawal, because each month there is one free withdrawal

- not at THEIR ATMs, because, unfortunately, bpost bank has no ATMs, they are owned by bpost, and regulated by the Federal government

You referred back to a gentlemen’s agreement from 2004 by the Belgian banks that stated they would offer minimum 24 free cash withdrawals at their own ATMs.

Test Aankoop, politicians, you have to defend the consumers’ rights, I get that.

I also get, today even more than a week ago, the symbolic value cash has. The idea that people ‘give banks their money, and they need to pay for it to get it back’. Everyone still has almost the same opinion on it, even the ones that avoid cash.

Nevertheless, I don’t know this was the right battle for you to choose.

Cash has a huge cost for society

Leo Van Hove, a global authority on cash, and professor International Monetary Policy at VUB is very clear on it: the cost of cash costs society in Belgium 0,5% of GDP, translated in a concrete amount: €129 per inhabitant.

Part of this is paid by the banks. Each individual transaction has a cost of about 0,70€ at third party ATMs. This is a cost for banks.

The gentlemen’s agreement dates back from 2004. That is:

- 3 years before the crisis hit the banks. This crisis still damages banks profits because the margins went down. Banks simply no longer earn as much as they did before the crisis. For years now, banks try to find ways to compensate the loss of revenues. 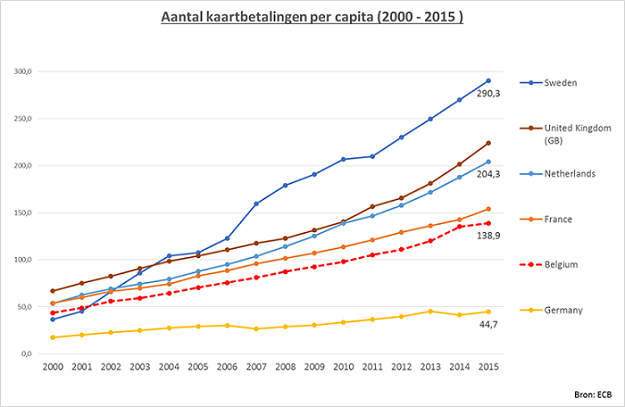 So be prepared for even less interest in cash in the near future.

Why do I have to pay for someone else’s cash usage?

Banks need to recover the cost of cash and if consumers don’t pay for it directly, they need to find indirect ways. There is not such thing as a free lunch.

This way, everyone has to pay for cash withdrawals!

Why should I have to pay for someone else’s cash usage? Why should youngsters pay for a minority that prefers an expensive traditional way of living and that requires more than 1 cash withdrawal/month?

So in a way: offering free cash withdrawals will penalise a lot more customers today than the measure bpost bank tried to implement.

In my case: having a free account with additional options for what you need ad hoc sounds like a fair price, aligned with my needs.

And thus is wonder: was this measure really “de wereld op zijn kop”, “the world upside down”, like it was stated in the news headlines?

In 2004, the 24 free cash withdrawals may have been a good deal. I will not argue about that.

Today though, I believe that it is within the commercial space for a bank to decide whether or not cash should be part of their basic offering.

New banks enter the market. These new player do not suffer from the legacy of the past. New entrants are digital-only players: no branches, no ATMs. Since they don’t own ATMs, they are not limited to the agreement of 2004.

Maybe tomorrow they realise that their customer base is no longer interested in cash. They are free to set their prices accordingly.

Why should we allow this discrimination towards the incumbent players?

Charging additional fees for cash withdrawals is not just about pushing consumers to digital-only. bpost bank was pretty clear about it, the measure impacted only 140.000 accounts. Likely a minority would be paying more because of this measure.

Consumers that are no longer satisfied can still move to another bank. European laws facilitated bank switching. And yet only a small minority does it.

That is why the bank switching service is created: to help consumers move to another bank when they are no longer satisfied with their current bank relation.

Cash has a huge cost. As the usage of ATM declines, the unit cost will increase. And so I ask you again: should we all be paying extra for (soon to be) a minority that still frequently use cash? Or can banks think again about a fairer pricing, in line with customer behaviour?