The New Face of Digital Banks

Digital banks, what are they really? People think immediately about Revolut, Starling and N26, new banks that re-engineered the way people bank in a digital context, the ones that ‘disrupted the industry’. The industry veterans may argue that digital banking already exists much longer, with ING direct and the likes.

To avoid the semantic discussion around our virtual round table about digital banking on January 28, with Peter Theunis, Co-Founder and CEO of Radar Payments and Jeroen de Bel, Founder of Fincog, we started by defining what a digital bank is.

Half of the audience believed that a digital bank is a bank that delivers financial services purely through digital channels, with another 44% saying that they also have a mobile-first approach and a light license, resulting in a limited set of services they can provide. 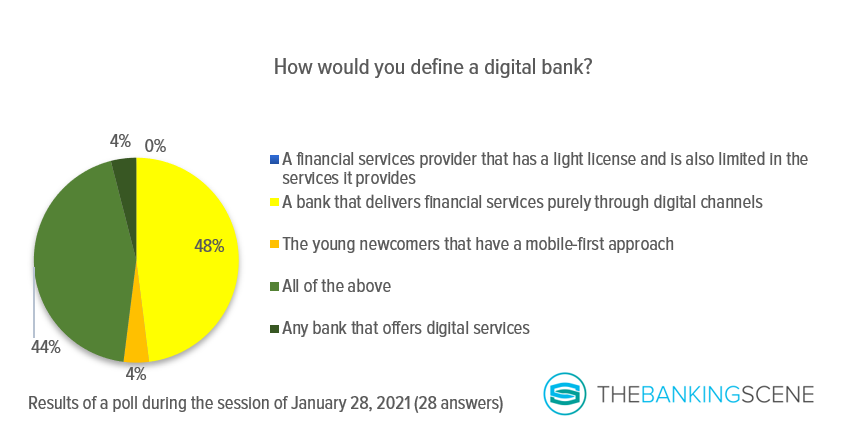 Jeroen defined it as: “It’s ‘neo’ so a recently developed or established entity of 5 to 10 years old. And it’s a digital native player that offers financial services. ‘Digital native’ is what you see in the customer experience. These banks are mobile-centric to the outside and digital-centric within the organisation. The licensing in that respect is not an element I share as a determinant. For me, ‘neobank’ exists in any form as long as it offers those services to customers.”

This way, we avoided discussing what is a neobank vs a challenger bank, as the distinction gets less relevant with the day.

The rise of a new breed in banking

Jeroen observes 2 categories in the neobank space in Europe and North America:

This is relatively different from digital banks in the developing regions like Africa, Asia and Latin America, where new digital banks target an unbanked population that does not have access to regular banking services.

Peter: “In countries like the Philippines and Indonesia or Cambodia, there are many banks. All these banks together may have 20%-25% of the population onboarded. So that is still 75% to win.”

These people have no alternative, making a digital bank in developing countries more lucrative. From the start, they do not have to be convinced with low prices.

These markets require a local understanding and tailoring of their services, to face their particular needs and challenges. For the same reason, as we heard in the session on financial inclusion with Nickel in France, their prospects often do not always have the right instruments to bank digitally, and in some case these people are illiterate.

Peter: “They are digital banks, but they are not always 100% digital. In developing countries, these new banks adapt to hybrid models. Take the example of TONIK bank in the Philippines, recently launched in December 2020, with Radar Payments. They will offer their services as a digital bank. In parallel, they partnered with a local coffee shop brand to have kiosks, people, to onboard customers also in a non-digital way.”

Peter also referred to Thyme bank in South Africa, a financial institution that partnered with BPC Banking Technologies for the required technology. They partner with a supermarket chain, who set up kiosks for client onboarding and instant card issuing for example.

Cubs became a lion: a few kings to rule the jungle

Coming back to Europe, we see a few new kings rising in the banking market, digital players that made a name by acquiring millions of customers.

All these digital banks started small, often not even with a full banking license. The first-generation digital banks often began with an EMI (Electronic Money Institution) license to provide essential banking services and sometimes upgraded afterwards. The strategy was hypergrowth in the first phase and stronger customer relationships leading to a solid financial plan in step two.

Peter: “It is challenging to become the primary bank of a customer because people don’t change so quickly. We are quite traditional. In the end, these banking relationships provide enough to keep the people with them and often the hassle is too big to change.”

The freemium model is very popular for digital banks that make a difference with superior digital services. The free account lets people taste of the convenience that they bring. Later, they try to upgrade the account.

They grow their products and services portfolio to persuade their customers to strengthen the connection with them to a first-bank relationship, instead of a second-bank or third-bank relationship. They start selling Black cards, more complex products like loans and insurance products, hoping it will not result in any reputational damage.

A second stream towards profitability is by growing a digital bank’s market potential. The further expansion brings new challenges, according to Peter and Jeroen. The lack of cross-border standardisation, even within Europe sometimes, makes it complicated to copy a banking business into other jurisdictions.

Yet, a few of these first-generation digital banks succeed. They have the human resources to investigate and overcome these challenges, and they have the market budget to convince new prospects. Some of these initial small challengers have become mature organisations, and they will soon become dominant brands in the market. Others may fall back on their original markets to build a stable business.

Although digital banks have their challenges, there is a lot that traditional players can learn from them. The paper “How to build a digital bank”, co-created by Fincog and Radar Payments provides plenty of great tips and tricks.

The threshold to set up a bank decreased significantly over the years. Technology gets cheaper, and banking-as-a-service models make the regulatory requirements more digestible. Creative entrepreneurs took this opportunity to set up new banks and brands that offer financial services.

Peter: “Having a nice bank app, with a debit card, is no longer enough, you need to deliver something additional. And then if you provide things that have added value for society, you always get into people who want to pay for it and find the value people want to pay for.”

Instead of thinking ‘financial services’ or ‘financial technology’, they think purpose and value. They aim to solve a particular need or live specific values, and they make sure that they can commit to that with a have a profitable core proposition, and partnerships to deal with compliance and technology aspects.

Peter: “Now, many will start without a banking license, but they are sponsored by other organisations who specifically deliver this regulation out-of-the-box for them.”

That is also where companies like BPC Banking Technologies and Radar Payments position themselves, to help these new entities rise and make a difference.

As an example, Peter spoke about a client that is currently building a digital bank focused on doctors. In the first phase, they will offer the traditional banking services, knowing that a marketplace is foreseen in a second phase. This marketplace will allow customers to bundle their purchases to grow their negotiating power towards pharmaceutical companies. Peter: “They choose a niche in their market and focus on that goal.”

Jeroen added examples that focus on Islamic Finance and SME banking to show this approach is not unique. He believes that “safeguarding client intimacy and the experience is about fully understanding who’s your customer and being very relevant to this customer. And then, of course, it’s a balance between how specific you go versus how broad.”

Digital banking has evolved massively, up to a scale where having digital banks can make a difference for the economy in general. That is true in developing countries where the number of customers at a digital bank is directly related to increased financial inclusion. In developed countries, thinking out-of-the-box and having an agile approach to sudden shocks in society will create a more resilient and efficient economy.

In that respect, I remain convinced that niche banks that understand their customers and act to their needs and/or societal values hold a bright future. It will be exciting to follow up how more colourful our banking sector will look like in a couple of years.

Of course, we’ll also see a few first-generation banks that will keep growing, that keep challenging the status quo until one day, even they get challenged by newer kids on the block.

Would you like to attend one of our Afterwork sessions as well? Have a look at our program: The Banking Scene - Afterwork