Islamic Banking Lessons and The Future of Islamic Fintech

The first chat intervention by one of our participants during our Afterwork session on Islamic banking was speaking: “Why Islamic banking? Doesn’t conventional banking cover your needs? What are, besides charges interest fees etc., the differences?”. Most of you are working in the conventional banking industry, and don’t precisely know what Islamic finance is about, is it? 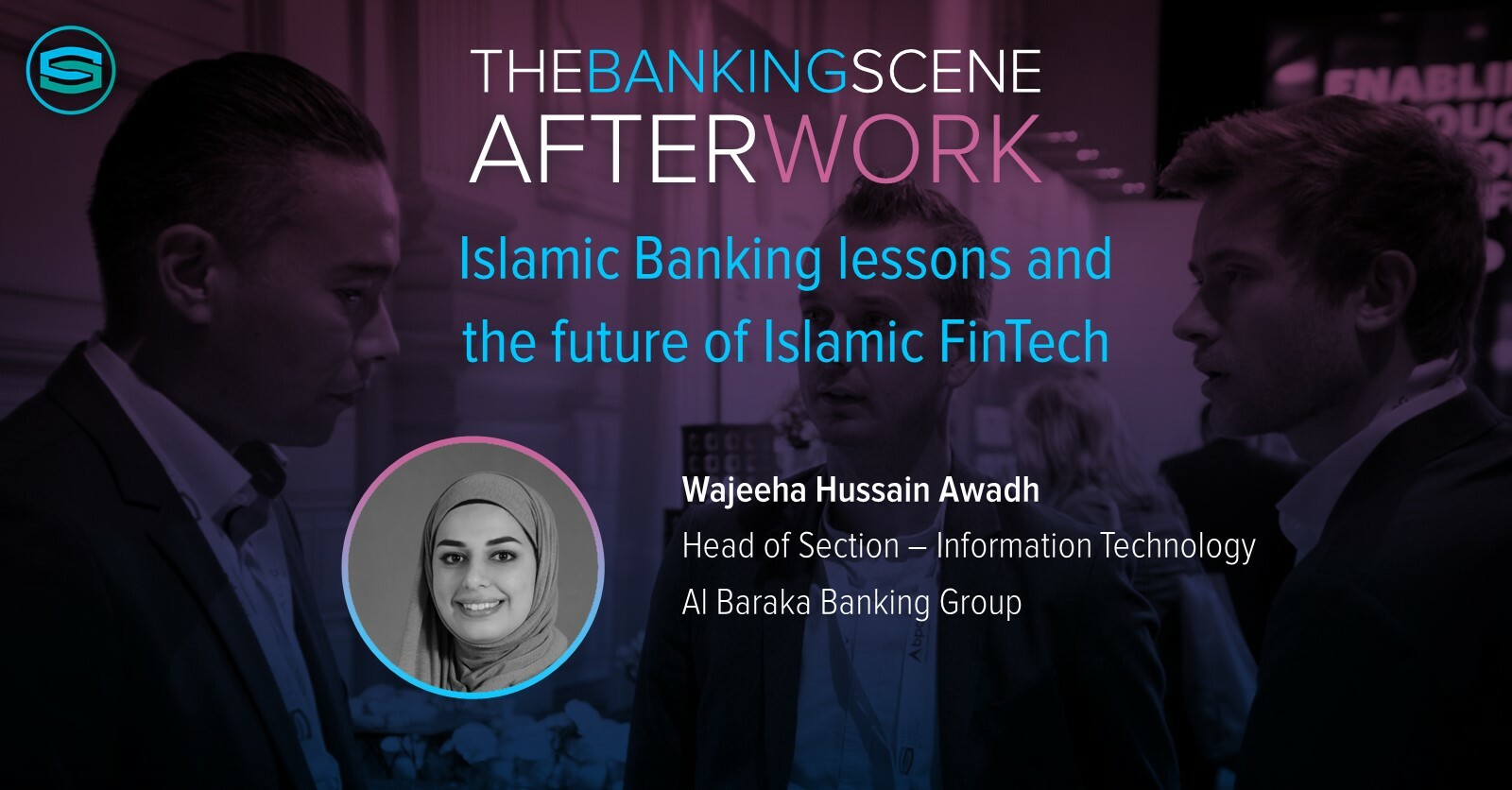 I am one of those people. For that, I decided to ask Wajeeha H. Awadh, Section Head of Digital Banking and Fintech at Al Baraka Banking Group, if she could help us better understand its fundamental principles. From a geographical perspective, Al Baraka Banking Group is the world’s largest Islamic bank with a presence in Africa, Europe and Asia.

I know Wajeeha since the Open Banking Interview Series last year. What an honour it was to invite her to one of our Afterwork sessions. We took the opportunity to mix the learnings about Islamic finance with the latest open banking updates and the future of fintech from her point of view.

Islamic banks are relatively new institutions, although its principles exist for centuries. On the Al Baraka website we read: “Although it draws inspiration from practices and values that go back centuries to the dawn of Islam as inclined above, modern Islamic banking started in the early 1960s concurrently in Egypt and Malaysia.” It was only in the mid-’80s that this new species of ethical banks, based on Islamic principles, became an established part of mainstream banking in the Middle East and South Asia.

Before banks became institutions, business relations were based on bilateral contacts. People in need of money, goods or other assets got in touch with a businessman, and he helped them out. In return, the businessman would ask for a profit-sharing or a services fee.

Suppose you wanted to buy a house, you talk to the businessman and agree with him buying the home you want with the possibility to become the owner yourself over time. You decide on the payback period, and you pay a service mark-up.

With business people becoming richer and more prosperous, people started losing trust. At the same time, conventional banks entered the market. People began to rely more on traditional banking, although this didn’t match with their religious principles all the time.

Islamic banking is interest-free, assets-based, and ethically driven. Wajeeha: “It encourages economic justice. These core principles and concepts, the do’s and don’ts not only existed in the Islamic religion but in other religions as well.”

Conventional banks are interest-based, and they are less selective in the industries that they support, including non-sharia compliant services, like alcohol, gambling. So business people and scholars, experts in religion, came together and developed what we call today Islamic banking. They studied what existed in conventional banking and tailored this where needed, to make it adhere to the rules of Sharia.

The essential difference of Islamic banking: interest vs profit

You cannot get money for money, and it is always assets-backed.

In Islamic business banking, as a bank, you don’t give a loan based on the creditworthiness of your customer. Still, you invest in the business based on the management skills and the viability of the project.

Wajeeha: “Today, if I want to deal with a certain customer, it is important for me to know that the business that I am financing is feasible and viable. It is a partnership between the customer and my bank.” Therefore, Islamic banking is sometimes also called partnership banking or participation banking.

Islamic banking is about risk- and profit-sharing, making risk management perhaps even more critical, and more complex than in conventional banking. The bank partners with his customer in good and bad days.

Islamic finance has different modes to partner. In a B2B context, a bank could partner on a company level, but also a project level, or any other asset the company requires.

Image a company level partnership: the bank provides the money and the entrepreneur its expertise, with a possibility for the entrepreneur to buy the bank out later in time. As long as the bank is co-owner, it will also influence decision-making.

A more common practice is where the bank would buy limited assets, like machinery for the company, with an explicit agreement on a buy-back at a later stage with a margin.

Deposit accounts are called profit-sharing accounts: the money you put on the bank account is collected, and the bank invests it in sharia-compliant, ethical investments. Once the bank makes the profits, the funds will be redistributed to the savings accounts of the customers.

The conditions under which you deposit your money at the start is based on expected profits, not a fixed interest like in conventional banking. This implies in theory that the profits can be less, although, in practice, banks have never differed from the expected return, said Wajeeha.

Bringing transparency and economic justice are the fundamentals of Islamic finance. In that respect, open banking brings tremendous opportunities in the finance segment. By opening data and collecting more data, banks can improve transparency and work together with third parties to find the best financial products for their customers’ particular situation.

Imagine your bank cannot provide you with the right service to fulfil your needs. By opening up, that bank can share the required data with a third party to provide the loan you are looking for.

Wajeeha: “Open banking brings diversity; it opens the market and brings innovation. It encourages everyone to have access to the financial system. By this, you achieve the core concept of Islamic Finance: you achieve more economic justice and a more transparent finance industry.”

Whereas in Europe, most people talk about PFM as the killing use case in open banking, Wajeeha sees the biggest Islamic open banking opportunity in third parties that help to create more complete risk profiles. With open data, it is much easier to detect risky customers and products and financial risk can be reduced.

Of the 17 countries where Al Baraka Banking Group has banking activities, there are 3 with open banking regulations: Bahrain, Turkey and Germany.

Their biggest achievements are in Turkey, where they developed a global API marketplace where they expose APIs to any fintech or third party that would like to test their solution, using any of the 36 APIs that Al Baraka Bank rolled out thus far.

Also, in Germany, where they set up Insha on the Solaris Bank platform, there are talks with fintechs for collaboration to grow their services offering.

Future of Islamic Finance and Fintech

If you think that Regtech will be the dominant fintech driver in the near future, like I did, think again. Wajeeha doesn’t believe so. Yes, regtech has its value, but it has not a lot more value today compared to what it brings to conventional finance.

You have 2 regulatory considerations in Islamic Finance Compliance:

- The standard regulations of acting as a financial institution

Adhering to both concerns is a thought process for a bank to go through: there are a banking audit and a Sharia audit, a regular approval, and a Sharia approval.

The rules from a Central Bank are very straightforward and easy to standardise through regtech. However, Sharia rules are subject to human interpretation. In Sharia, there are different school of thoughts resulting in different variations. These are elements you cannot automate with Regtech Today.

With a tech-savvy new generation that is still highly unbanked in many Islamic countries, the real Islamic Fintech opportunity, according to Wajeeha, is in crowdfunding.

Wajeeha: “I believe that crowdfunding itself is meeting the soil principle of what Islamic finance is about: to bring the businessman together with the ones in need of money.”

What’s fun with these platforms is that they can easily tailor their offerings and offer conventional AND Islamic finance products. These things get intertwined increasingly more.

Payments is another essential domain in the future of Islamic Fintech, but that is not any different for conventional banking.

Wajeeha: “Future banking will be very much embedded in day-to-day life. What will happen is that you see a lot more partnerships with digital platforms and different ecosystems.” She believes it will not be sensed the way it does today, which she makes clear with the petrol station in Bahrain: to pay you needed a card, but today that is no longer the case. The payment became an invisible transaction behind the scenes.

You choose the pump number on your phone, and the payments are made.

Does all this make Islamic banking more transparent and fair compared to conventional banking? Hard to say with such a brief introduction of course. That was at least the feedback from someone in the audience. He is right: banks have been overwhelmed with more reporting to create more transparency; they have been pushed to more ethical governance. ESG will make this even more important in the future, and rightfully so!

Nevertheless, I believe it is always worth to look over the wall at other cultures to see if there are things that we can learn from them as they learned from us in the very beginning.

Share this via
TBS After Work Islamic Banking Lessons