ChatGPT and Banking: Friend or Foe?

ChatGPT took the world by storm at the end of 2022. The tool convinced 5 million people in only five days to test the new chatbot. Technology influencers worldwide left the metaverse and NFTs to explain to everyone how game-changing ChatGPT was and how fundamental this is for the evolution of AI.

I tested the tool as well, first by asking who Rik Coeckelbergs was. This is what I got:

"I'm sorry, I don't know who Rik Coeckelbergs is. Can you provide more context or information?"

What is interesting is that without further context, it couldn't give me more information about The Banking Scene. However, after asking who Chris Skinner is, suddenly ChatGPT gave a convincingly wrong answer: 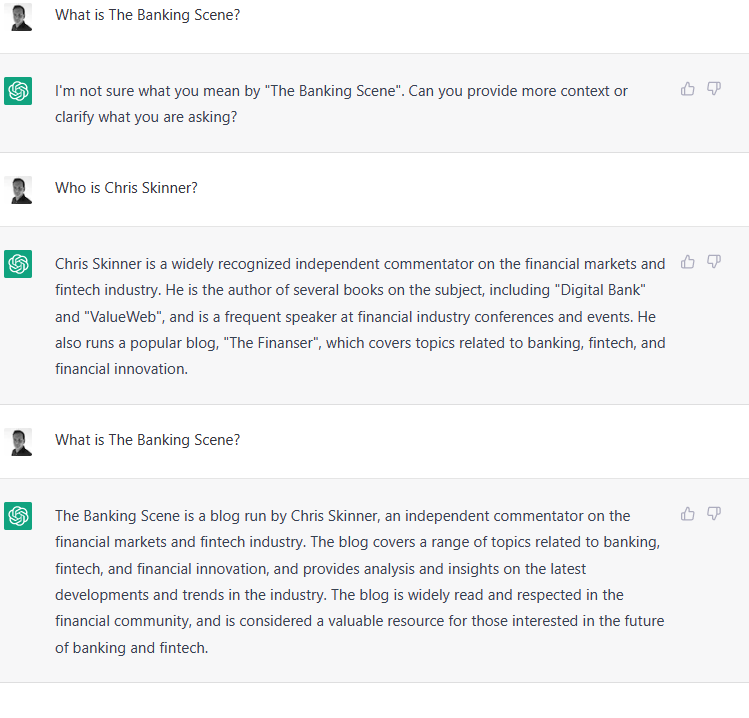 My experience with ChatGPT isn't great, but clearly, opinions vary. That is why we organised an Afterwork session on "ChatGPT and Banking: Friend or Foe", for which we invited:

You may have heard of DALL-E, a tool that lets you create visuals and art from a description in natural language. Again, I did the test, asking the tool to make a visual for "ChatGPT and Banking: Friend or Foe?"

This is what I got:

Not the most creative visuals, but they are built artificially, based on natural language.

ChatGPT is in the same subcategory of AI as DALL-E.

Frederik explained ChatGPT: "ChatGPT is just the latest example of what has now become known as a set of AI technologies called generative AI. ChatGPT is the interface to engage with GPT, an example of a large language model."

The idea of a large language model, like GPT, is that it goes through a massive set of documentation and text to find relations that help the system understand things in ways a human being could not find. The technology isn't new, by the way. Google uses it as well, for example.

"GPT is just another way to collect a lot of information of a model, and it is then capable of answering specific questions", added Bart.

"ChatGPT is bringing together two important trends is one: AI that has an immense potential of understanding language, texts and images, and through this understanding, allowing it to generate new tech", concluded Frederik as to why this development is so important to the world.

What are ChatGPT's strengths and weaknesses?

ChatGPT is an immensely powerful tool, which is an enormous strength, and at the same time, also its biggest weakness.

The tool is trained on data from the past, in the case of ChatGPT, on data from before 2022, to be precise. Because it interacts as a human and will try to find the right links to your question, chances are it answers your question as if it were true.

"If the answer is wrong, it is wrong convincingly. We have to be careful to show the result to an end-user as if it's something they can trust", explained Frederik. Banks are all about trust so this kind of organisations cannot simply put their faith in this kind of technology, as it might lead to a bad customer experience, according to him.

The big difference with a search engine is that it cannot provide any source of the information it shares. That may look very user-friendly, but it is also a big weakness as it is hard to check whether the tool spoke the truth.

Ethics is linked to this as well. How can we avoid bias if we don’t have the source of information? Bart reckoned that the team behind GPT must have done a great job in avoiding bias, but as he said: “All algorithms are based on the behaviour of humans, and humans are by nature biased. Is that the problem? If you let it free, if you let it work completely unconstrained in an uncontrolled way, yes, that's a problem.”

Bart explained that GPT should not be used for calculations. GPT will not be capable of giving good answers to every question. That is not what it is made for, as you shouldn't use it to analyse data.

Bart:" It is terrible at factual elements. So there, we still need to rely on the old-fashioned AI which exists today. I don't see it being used at risk analysis or money laundering or fraud detection."

It is also worth noting that enormous computing power consumes a lot of energy, so it is not the most eco-friendly application.

What does this mean for banks?

As much as people like to claim how it can be used universally across the bank, ChatGPT’s weaknesses demonstrate that finding the right use cases in a bank is not that easy.

You could have guessed: as a starting point, it could be OK, as the technology can mine loads on unstructured texts, but make sure you critically check the conclusions. Frederik advised using it as a hypothesis, but not more.

Our experts did believe in the value of using the technology to support the back office in answering customer complaints and questions if you keep a human in the loop to critically reflect on whether the answer makes sense.

After more iterations, the system will get smarter, but organisations need to remain cautious.

Training the tool with bank data could speed up the process. Bart noted that banks are very context-driven, governed by many contracts, laws and procedures. Even if these hurdles could be overcome, are banks willing to take the risk that their chatbot suggests a product of competition if a client asks for the best possible investment product, for example?

In many cases, a chatbot that answers based on a decision tree will be more reliable at providing the correct answer, in line with corporate policy. More important: it if cannot answer, it will forward the question to a support agent instead of inventing an answer.

I learned so much in this session. Clearly, ChatGPT is a fun tool with a lot of potential. But is it ready to serve banks? Maybe not yet.

Frederik did make an excellent point by noting that the biggest shareholder of OpenAI, the company behind ChatGPT, is Microsoft. If they open up this technology on their Azure platform for a developer audience, the number of use cases will grow exponentially.

To come back to the question: “ChatGPT and Banking: Friend or Foe”, the answer is more nuanced than what ChatGPT tries to convince us from: