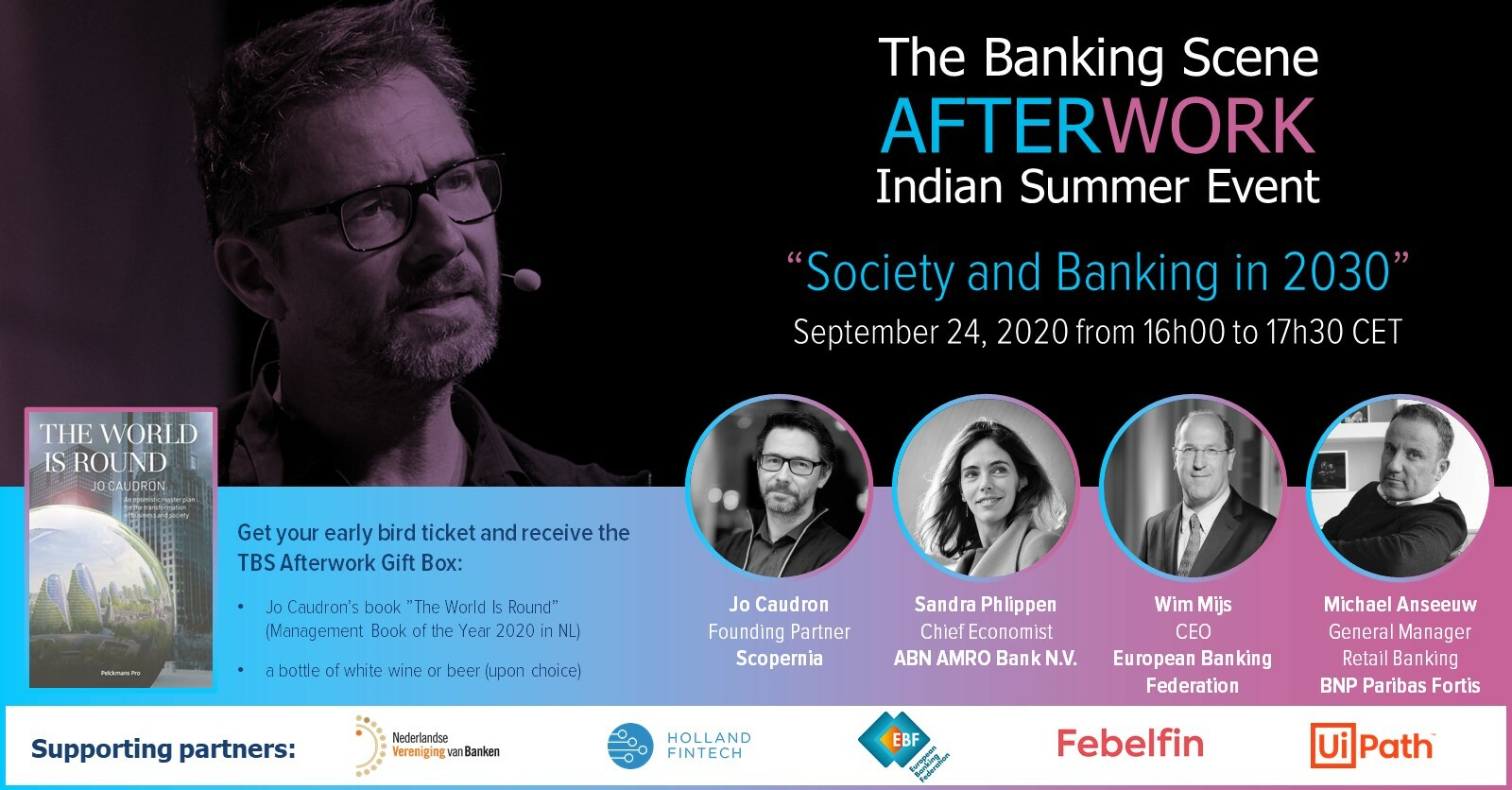 Get your tickets here!

After a highly successful Summer Event on Digital Transformation, we are proud to announce our second Executive Afterwork. The ingredients of our first executive event remain the same; the cake is slightly different.

Our society will look completely different in 2030. All sectors today find themselves in their particular perfect storm. In his recent book, Jo Caudron concludes that "they collectively form a Metastorm, an all-transcending series of interwoven perfect storms. The Metastorm will have an impact on every decision we take at the company, policy or individual level".

There is no doubt that our industry will need to adapt to remain relevant in this Metastorm. In this session, we'll investigate the first signs to this new reality and we will translate that into the future. You will learn what topics, challenges and opportunities can make or break banks as we know them.

Jo Caudron will set the scene with his book presentation on The World is Round, where he searches for the links between each of the social transformations that he observes today. He ultimately concludes that they collectively form a Metastorm, and all-transcending series of interwoven perfect storms. The metastorm will have an impact on every decision we take that the company, policy or individual level.

After this more general presentation, we look at how financial services can anticipate on this, how they can remain relevant in this Metastorm. We could not imagine a better list of diverse executives to discover this together.

Just like our Summer edition, every ticket holder will get a hard copy of the keynote's book, this time 'The World if Round - An optimistic master plan for the transformation of business and society'. Early birds can enjoy a bottle of wine or beer from the house (valid until the end of August), delivered at home well before the Indian Summer Event.

Tickets are only 99€, or enjoy the session in a team: from 5 tickets on there is the group discount: 399€ for 5 tickets.

You can buy the tickets through Eventbrite, or you get in touch with us to discuss the group discounts.

Jo Caudron started his digital career somewhere in 1994. It was all a bit by accident that he discovered the internet and together with his brother and two friends, he created the first digital agency in Belgium. Now we are 25 years later and he can look back on a rich history of digital activities. Of some he's still very proud. Others were endeavours to forget quickly. Yet all of these entrepreneurial moves made me what he is today: privileged to be in this business for over two decades, getting to know so many interesting people. He considers himself to be a transformation strategist. The good thing is that this profession doesn't really exist, so he doesn't have to live up to specific standards or conventions.

He is passionate about change and how digital is impacting everything around us. For over a decade his company Scoperina (formerly known as Duval Union Consulting) has been helping all kinds of organisations, from Denmark to Dubai with the big question: how is digital changing our very essence? For companies this basically means understanding how business models will change. Recently He started thinking about how digital is impacting society as a whole. This was the driver to start writing his latest book, "The World is Round". His book was voted Management Book of The Year 2020 in the Netherlands

Sandra is also affiliated with the Erasmus School of Economics as an assistant professor. From September 2016 to March 2018 she was the economics editor at Algemeen Dagblad. Previously, she was editor-in-chief of ESB, the bi-weekly journal of economics and statististics. Sandra also was board member of the Genootschap van Hoofdredacteuren, guest columnist for de Volkskrant, columnist for Z24.nl and board member of the Dutch Royal Economic Society. Sandra is active in the social domain and regular guest in programs such as Buitenhof, Jinek, RTL Late Night and Pauw. Sandra Phlippen graduated from Erasmus University Rotterdam and received her PhD in 2008.

Wim Mijs (1964) was appointed Chief Executive Officer of the European Banking Federation in 2014. Between 2007 and 2014 Wim served as CEO of the Dutch banking association NVB. During this tenure he transformed the NVB into a modern industry association, positioning it as the key representative of the banking sector in the wake of the financial crisis.

Wim studied law at the University of Leiden in the Netherlands, specialising in European and International law. After his studies he worked at the International Court of Arbitration at the Peace Palace in The Hague. In 1993 he joined ABN AMRO in Amsterdam before moving to Brussels to head up the bank’s EU liaison office. Wim moved back to The Hague in 2002 where he became the Head of Government Affairs for ABN AMRO.

Michael Anseeuw is the General Manager Retail banking BNP Paribas Fortis. He started his career at BNP Paribas Fortis in 2001 and he worked in several different positions starting as an Internal Consultant in 2001. From 2004 he acted as a Counsel to the Fortis Group CFO, Head of Corporate Development. Following that he became the CFO of the Fortis Consumer Finance Group. From 2007 he worked as a General Manager for Strategy and Business Development for Fortis Retail Banking, from which he moved on to become the Head of Fortis Consumer Finance and Postal Banking.

Directly before taking his current position as the Head of Retail Banking he was the Head of Alternative Retail Brands. Prior to working for BNP Paribas Fortis, Mr Anseeuw worked for Accenture as a Management Consultant between 1996 and 1999. He is the co-founder of Smartizens.com, of which he was Chief Executive and Commercial Officer till 2001.

Join us for our Indian Summer Event, where we discuss a future of 2030, and where we look how banks will remain relevant in that future society